Here is a review of a show I did end of 2015, Nutcracker Festival at the Secret Theatre in Queens.

There are three more opportunities to attend an inventive, entertaining and thoroughly unique interpretation of the Nutcracker at the Secret Theatre, 44-02 23rd St., Long Island City, NYC. The setting for Act I is a holiday party in the 1920's at a NYC brownstone. The music is Duke Ellington's "The Nutcracker Suite" so expect some lively, 1920's jazz infused choreography. The familiar Nutcracker elements are all there, Clara, her prized nutcracker, a mysterious party guest-magician, Clara asleep by the Christmas tree at the end of the party, and a dream world snow storm that transports Clara to a fantastic new world in Act II. This is where the "Dance the World Festival" comes in. Instead of a traditional "Land of the Sweets and Sugar Plum Fairy", Clara is transported to the World's Fair of 1922 in Rio de Janiero where she is welcomed and entertained, not by "marzipan", "Spanish chocolate" and "ginger bread cookies" but by actual cultural dance groups from throughout New York City. The second act line up changes with each performance and includes 11 cultural dance groups ranging from classical Indian dance, Chinese folk dance, Bulgarian dance, Indian fusion, Haitian, Jamaican, Middle Eastern, and Mexican dance ensembles and solo performers. The effect is riveting and exciting, especially for someone like this reviewer who has had little exposure to other international dance forms.

JP Dance Group dancers are well-trained, energetic and particularly effective as an ensemble within the confines of the Secret Theatre black box stage. They can make the small space seem large. The constraints of the space is the most notable drawback to the show, but all the perfomers have been able to make the best of it and succeed in drawing the audience into their presentations. This is a show that is begging to bust out of a small theater into a larger format. The second act Finale is a joyful samba by the JP Dance Group troupe, which Clara is invited to join. And, in the end, she is joined by her "Nutcracker Prince".

The three remaining performances will showcase all of the cultural dance groups in repeat performances of the previous three nights. If you are looking for a Nutcracker that is new, interesting, imaginative and fun - this is the show for you! 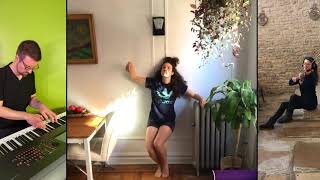 Fall Performances with Spaces of Fontana